A Letter to Mary Karr

When Abraham Lincoln and Harriet Beecher Stowe met for the first time, the President allegedly said, “So you’re the little lady who started this great war!”

When it comes to 21’st century memoir, one can make the case that Mary Karr started the publishing phenom we now refer to as “the age of memoir.” Her The Liars’ Club, 1998, became not only a bestseller but also set the standard for literary excellence in memoir. Karr is a also one of my personal heroes, as many previous posts, including this review of her most recent book Lit,  have attested. So I am still basking in the pleasure of having just met the svelte, fiercely intelligent, vivacious, intense woman whose three memoir volumes have shaped a whole contemporary genre. 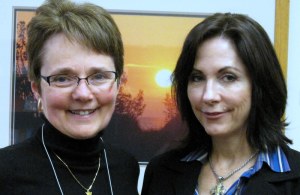 This picture makes me chuckle.  I look a little like the dog that caught the Karr, and Mary looks for all the world like the Mona Lisa.

Having listened to two public presentations Mary gave at the Calvin College Festival of Faith & Writing, and having talked in person with her, I come away with a desire to read more, read more intelligently, and pray more, and pray more deeply.  That’s what I learned from the woman who has her father’s love of salty, earthy expletives and her mother’s determination to go her own way. When she met God, a special priest named Father Kane, and the Ignatian spiritual practices, she had a new story to tell, and nobody tells a better story than Mary Karr. Also, no one pursues her object more intensely than Mary–unless it is the Hound of Heaven who pursued her. When she says grace before a meal, she cups her hands upward, as though to both receive more blessing and return more thanks. Then, when carefully plated food is set before her, she makes a joyful noise and forks with gusto.

Dinner with Mary Karr was the grand finale for me of much feasting on words at the Calvin College Festival of Faith & Writing. To whom much is given, much is expected, so I want to share more than just tweets, as I did in the previous post. Richard Rodriguez, one of the keynoters, said that he never read a blog post that holds the passion and clarity of typical a 19th-century letter. That’s a challenge, and you know I love a challenge. So, here’s a letter to Mary (and to you, gentle reader) that may not stir Richard Rodriguez’ admiration, but perhaps it contains a fraction of all the gifts I have been given while eating and walking and dreaming among writers these last four days.

You taught me to search for the grace in the tiny moments and not give perfunctory thanks for the big things I am duty-bound to appreciate. So I’ll leave out the part about moving from a Writer’s Festival to a Writer’s Retreat–eight days in heaven. And I’ll overlook the fact that I am seating in a large, stuffed, green wool chair with a view of a lake and of  a woods bursting into leaf. I won’t tell you about the succulent crunchy tacos at lunch today or the pork in red pepper sauce we’ll scoop onto our plates tonight. I won’t mention the amazing, intimate, soul-revealing conversation last night among 14 writers, images of which still float in my mind. I won’t tell you about the luxury of taking a yoga class in the middle of the morning. For sure, I won’t tell you that I won the lottery of birth and happened to be born in America and that I work in one of the most amazing places on the planet.

No. What I want you to know is this: I saw your face. You love your student’s faces, you said, and I knew immediately what you meant, for I have loved many student faces. I also have loved my teacher’s faces. When Mrs. Lochner, my sixth-grade teacher, walked through the aisles at Fairland Elementary, I once let my eyes gaze with uncensored devotion on her grey hair pulled back into a bun at the nape of her neck, on the straightness of her back and grace of her stride when she walked, and on that excellent face, a map of kindness and authority. She was not only teacher but principal and bestrode my little world like a colossus. She saw my adoration that afternoon and gently guided my eyes back to the paper I was writing. You would do that too, I think. But I can tell you that your name, Mary, is the perfect name for who you are, and that your face, with dimpled chin, blazing eyes, translucent skin, and shivering cheekbones, says it all.

You said you are just now just about able to go back to find the young girl you were in Texas. Having laid open the pain in that same childhood to yourself and your readers, you can now go back and re-unite with the girl in you. I felt the exultation of my own girl-self when you said that. When you stepped out from behind the podium on Saturday night, I saw that girl in you.

No longer did I envy you the body that can still fill up a pair of skinny jeans just the way they were meant to be filled and the flair that brings together a cross at the neck, boots on the feet, and big brassy belt to hold it all together. Nope. I left that thought in Texas and went back to a Pennsylvania dairy farm where I grew up. I just wanted to go run in the clover.

These two moments of glad epiphany arose in me from just a few hours of being in your presence and were illuminated by the memory of joyful discoveries while reading your books. So it is only appropriate that I end this letter as

Your grateful and obedient student,

18 Responses to A Letter to Mary Karr