Learning from a Baby: A Memoir Writer’s Teacher

My daddy offers me support before walking, 1949,

From Wordsworth I am reminded that the joy I knew as a child, before I developed this shell around me I call my “self,” still exists. None of us, except possibly Vladimir Nabokov in his memoir Speak, Memory, remembers our infancy. Whatever happens in our brains to bring us consciousness seems to erase most, if not all, memories of life in the first two-three years. Try as I may, I can dredge nothing from my early childhood until the birth of my brother when I was nearly three years old.

But fortunately I have my own teacher. His name is Owen, he’s my grandson, and he’s four months old. By holding Owen in my arms, feeling his supple openness to the world, placing my eyes next to his eyes, my ears next to his ears, my heart next to his heart, I can feel the “clouds of glory” that are still “trailing” him. I can feel the heaven that lies about him.

Writer Kathleen Norris, whose book Dakota: A Spiritual Geography was among the first to inspire me to want to write about the land that formed me, has experienced a similar connection to a child: “I recently spent some time with an infant who is four months old, and I would say that her work is learning the world. She approaches this daily task with a focus and cheer that I find inspiring. The ability to focus, to be still and listen, is a gift we may receive as infants, but have to learn all over again as adults who are easily distracted. Yet the gift of attention is one we need if we are to write works that are meaningful to others.” You can read her full essay here.

Grandson Owen before proprioception. Moving with the whole universe in the eternal Now.

Babies lack a sense of separation from the rest of the world. They don’t even “know” they have body parts. They soak up sense information but have to be taught that they have eyes, ears, nose, throat, mouth, hands, and feet. Awareness of the mouth and the sucking function comes first.

But hands and fingers? Some of the early music classes for babies name the parts while touching them. The teachers talk about proprioception–awareness of the body in space. As one sings to a baby, one’s own hand becomes more magical, as in this 20-second video. 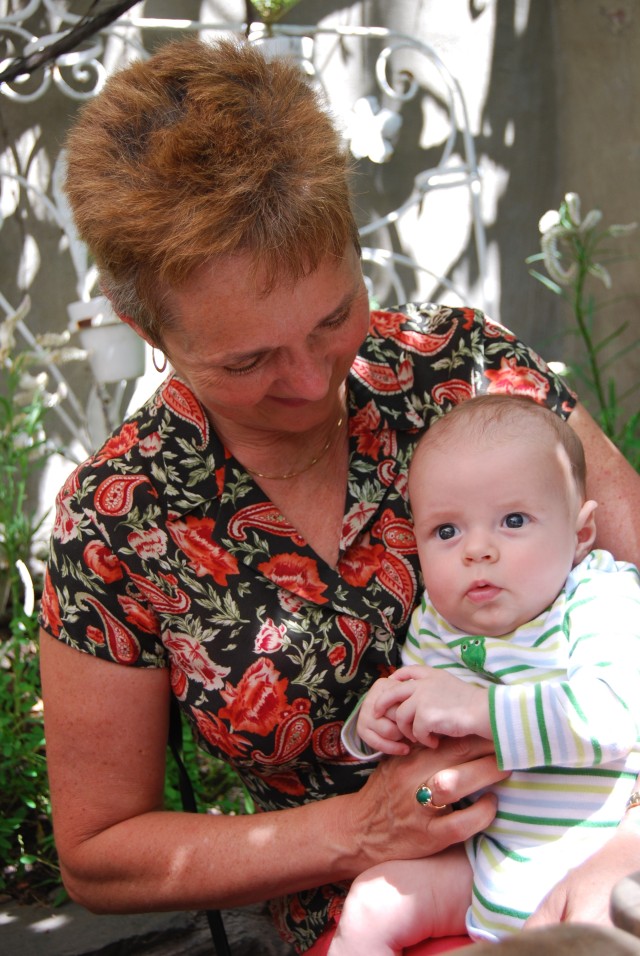 My teacher Owen as I try to acquire a "philosophic mind."

Author of memoir Blush: A Mennonite Girl Meets a Glittering World. Blogging about Magical Memoir Moments and Jubilación -- vocation in the second half of life.
View all posts by Shirley Hershey Showalter →
This entry was posted in Personal Reflections and tagged babies, childhood, Imtimations of Immortality, Owen, The Prelude, William Wordsworth. Bookmark the permalink.

18 Responses to Learning from a Baby: A Memoir Writer’s Teacher